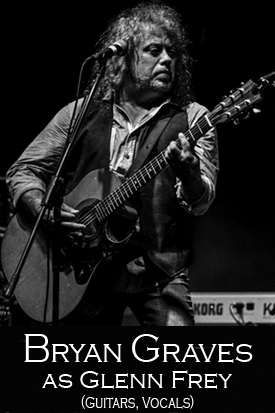 Bryan began his musical and stage career at a young age performing with his dad, Josh Graves.  Josh is a legendary dobro player and an original member of Flatt and Scruggs.

In 1985 Bryan sang and played lead guitar in his own original band "Lundon Angel" touring most of the country.

1992 saw Bryan begin performing as Paul Stanley in a KISS tribute band.  The group toured world wide with
performances in Japan, Korea, South America and all over the US.

Bryan remained with the group until 1999, when he was cast in the musical, "Summer of '66."  The musical was directed by Ted Swindley (Always Patsy Cline) and ran for 2 years.  During this period, Bryan also gained national exposure when he sang background vocals for many of the artists that appeared on the "Crook & Chase" morning show on The Nashville Network (TNN).

Bryan made his return to the tribute genre in 2001 when he rejoined the KISS tribute he had been a member of several years prior.  Shigadig Productions was started by Bryan in January of 2009.  His company produces original music, commercial jingles, and movie soundtracks.

Bryan resides in Hendersonville, TN with his wife and children.